The only team outfit I wear, the only "kit" as cyclists call them, is from my buddy Etsu's team in NYC.
I have never raced for them or even been able to keep up with them on any but their slowest rides. Regardless, Ets sends me a kit every year and I hope I'm decent advertising. I used to sponsor the team in its early incarnation but still ...whenever I put the black and green on I feel a little unworthy.
I apologize in advance for the possibility that someone they actually race someday will have seen me out on the road and thought..."that must be a team for old slow guys..."
It's not. They're beasts in NYC. 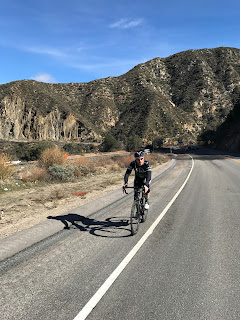 Anyhow Ets, his full name is Etsukazu, was out in LA training for a week and I got to go along with him on his last rest day spin before he flew back to NYC.
A rest day for Etsu means a 15 mile climb at a cadence which would kill most people and then after having lunch with me at the end of 50 some miles going back up the Mt for a 9 mile....quickie.
They're a particular breed racers.
It's funny to get just a glimpse of what one's body can do. We were coming back down the Mt and Ets casually said "Weird huh, how far you can go on these things." And I thought, it's all in our minds, what we can and cannot climb. Well, a lot of it is. Eventually you do reach a point where you come face to face with what your biology simply can't do but that is rare. Most folks never see that self. They never dig down that deep.
Maybe that's the weirdest thing....that for some reason, we don't want to know...where we stop, where the limits of our physical, willful self lie.
One would think the opposite would be true, but it isn't. Even people who "work out" all the time or who push a bike a decent cadence, people who talk about endorphins and bonking and regimen, really most of them aren't that close to the wall, the break down, the limit. The limit isn't just about effort required, it's about the time. Lots and lots of time. Like an equation for power, force and time equals...?  Knowledge? Realization? Like what it takes to wear down stone. To be an endurance athlete you need the sprinters hunger and fury and the patience of a good painter: let it dry let it dry. next coat.
I don't know. I never had the guts to go out and find where I ended. I've raced in various sports, I'm a decent natural athlete, I like pain but....I could never quite get myself to accept losing or paddling along for months and months until something switched into gear. The dull eyed tolerance of the real athlete. Didn't have it.
But every once in a blue moon I get a glimpse. Still, even at 50 - I'm 49 but my theory has always been that once you hit the year before everyone's rounding you up already- saying you're 49 is like saying you're 6 foot and 3/4s of an inch. Nope.
But every once in awhile -and Im thinking Ive probably got about 5 years left of this- something feels less difficult, the strength needed to get thru it seems to come out of some deeper region in my thighs or my lungs.
And I think to myself....God, why didn't someone tell me this when I was 16?
Or ....why couldn't I listen?
The pic below is from the little parking spot at the first "summit" of the LA Crest ride. Call it Camp 2. The decent we're about to drop into is 9 miles and for the entire fall ...you don't have to touch your brakes. Heaven.
( I'm eating a peanut thing, not checking my phone, thank you.) 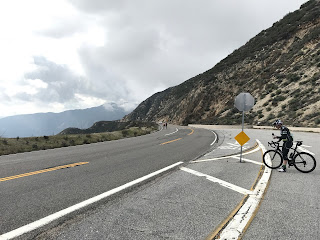 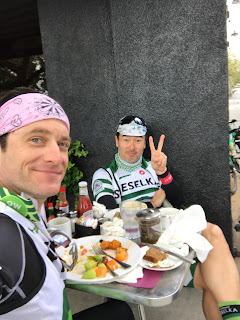