I knew something was wrong.
I took the right onto PCH and it was like catching a wave in Maui. (Something I've also done and barely lived to regret. "Will the white guy body surfing with the kids please get out before we have to retrieve his body.")
Another story.
The prevailing winds in LA usually blow in off the water. In the Santa Monica bay that means if you're going North or North west you're getting hit in the face by them and if you're going South or  South East you've got a tail wind. It's a iron rule.
Except.
When the Santa Anas come in. It all spins around. Everything feels bizarre. You don't notice at first, but as the day goes by things get wider, looser, pulled apart. It's hard to explain but it's like the roof's come off the LA basin and all that's keeping anything down, all that's keeping the tenuous tissue of SoCal together is....will. It's just us and the stratosphere, way way up there.
When the winds turn around they come all the way in from the high interior deserts that front the Sierra range and Death Valley and ...there's nothing out there but what Cormac McCarthy called our blood rite. You can't sugar coat shit in the unicorporated zones outside of 29 Palms even if you have a fortune. It's brutal country, waterless, sere, cruel, militant. And for a week or so every year its indifferent Calvinist soul breathes down upon us.
It's a documented truth crime goes up during the Santa Anas. People stab their spouses, run the red light, throw the sucker punch, take the final step... when the winds arrive from the desert.
I think it's all part of our manifest destiny. We built this terrible miracle that is California on the bones of the Indians and the Mexicans and the Chinese and then finally our own brutalized selves crawling in from the Dustbowl....we made a civilization sparkle, but its morality its humanity is thinly spread. The winds take that spiritual topsoil and spin it into the sea.

Winds in the mts and the canyons of LA will reach 60 MPH this weekend. If a fire starts it'll spread faster than a landslide. Whole neighborhoods can go in an afternoon if the two coincide.
One of LAs little secrets.
And on a bike you'll go as fast a professional racer in one direction.
In the other you'll be pedaling in your climbing gears to keep from falling as you go downhill.
I nearly came off the thing 4 times. Nuts. Madness.
Zuma Beach. 45 miles.
On a lighter note: this is a detail of the bike that Felice Gimondi road to victory in the '65 Tour De France. Poor guy- how great he woulda been....but he had to be the same age as Merckx.
It's so beautiful I wanna lick it.
I'm gonna sell my carbon and titanium bikes and buy some old steel frame Derosas or a Bianchi like this. Who needs to pretend they can go faster when no matter what they'll never go fast enough? Ride something you love that's gorgeous. Basta. 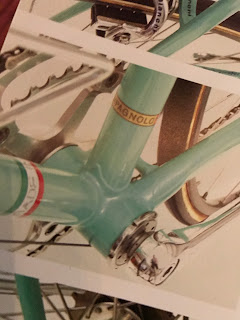