It's one of things they tell you when you first move here.
The Griffith Family still owns Griffith Park.
The largest Park in any American City.
One family- leases it to LA for a dollar a year.
I have no idea if this is true. Are there still Griffiths? After they made Birth of A Nation is this what they bought?
Was DW really a Griffith?
Who knows?
Griffith has lots of trails in it that you can't ride - you can't ride on any trails in LA City parks which seems a little extreme until you realize how little park land there is in this place and how many bikers. It would be war. Hikers and bikers and tourists colliding. Hills denuded by the million rock hopper enthusiasts...or not. Who knows?
But you can ride on roads and Griffith has some nice steep access roads up and over it.
Rained for days and then cleared today and I thought oh the sun's out it's not going to be that cold. Mistake. Hands freezing on descents, knees locking up, hamstrings -well the right one at least- letting me know it was only gonna put up with so much of this shit. But what fun. Up Nichols, down Mulholland, up into Lake Hollywood down past Warner Bros- caught the green this time both ways and up and over Griffith twice. Chased some senior citizen on a steel road bike up to the top - he pounded a big gear (which some people call little gears a term which makes no intuitive sense to me - IE he was pedaling slowly) I kept a respectable constant distance, but when I got to the top,  I thought oh look he's stopping to show me he beat me on his skinny tires I'll just turn right and go up the dirt road to the Hollywood sign, how's that buddy, feelin strong now??
Silly yes- cyclists do this dumb shit all the time, little pulls and tests and to see if the person next to you can take it.
Really stupid on my part as you can't actually get to the Hollywood sign this way and I was dying when I reached some water tank with a view of ....yahoo, the Valley. I share the bounty below.
But the descent down to Los Feliz was a blast and the sun came out and LA looked amazing after it's week under the pounding rain and snow, I passed two guys walking a dog that didn't look like it could have walked down the driveway but somehow got up here- determined old pooch - one of those sausage corgi type things that always seem to be smiling, like they're having a good time.
Washes of dirt and gravel across the road, crows flipping and cruising at eye level, clucking that odd crow speech which someone told me is different in every part of the country; West Coast crows don't cluck like East Coast crows. Makes sense.
Passed a coyote trotting the other way who pulled to the side of road but didn't give me any more deference than that. Healthy coat, intelligent eyes....probably saying to himself....."if only I were bigger..." I remembered shooting tv one night down below on the Griffith golf course late at night, ten years ago now at least. I had some time between scenes and I went for a stroll on the course under the moon. The grass looked blue. I was standing mid some fairway when I heard what sounded like little girls laughing, I turned around and 15 coyotes ran right past me, thru me really, on either side, like I wasn't there. And I suppose to them, I wasn't. Their feet a graceful drumming as they disappeared.
Just drops and climbs all day basically. And that was fine, what the hell, find the right gear and hope your back doesn't give out.
Coming back down the valley side an hour later a big fella in team gear drew up next to me, both of us splattered in LA's red mud, We'd both been cheating a little on the trails- "Definitely Mt bike weather huh? " I was sitting up blowing on my hands , "Little chilly for sure. " He laughed, "I'm from Green Bay, this is nothing." I called after him, "Then I guess we have even more in common, I'm from Pittsburgh.." And he looked back, "It's over man- the forces of evil have triumphed. No super bowls this year."
A city of ex-pats. (Decidedly different than a city of ex-Pats, someplace I never want to go) People glancing off each other and occasionally finding moments to bridge the gap. As he went by I realized he had those little testicle things hanging off his saddle that guys with big Dualies and possibly not so big other attributes hang off their tow hitch. Had to laugh. Certainly "took some.."
maybe 30 miles. 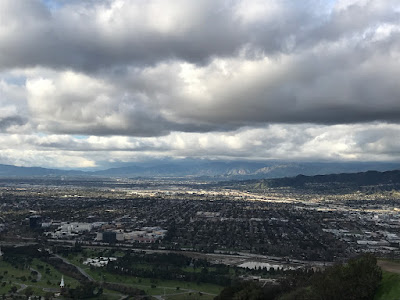 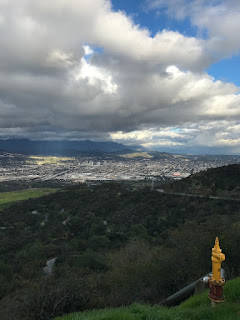 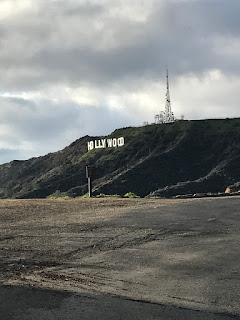